Writing has never been easier than it is today but in a way, it has also become harder. The humdrum of life sometimes real, sometimes imaginary, leaves us with very little time for writing. Distractions suck out our imagination, inspiration and energy. We find ourselves in front of our laptops with an empty screen and nothing worth writing about.

Here are some inspiring quotes on writing from famous writers that will help get going on your writing journey.

A professional writer is an amateur who didn't quit.
— Richard Bach

If you wait for inspiration to write you're not a writer, you're a waiter.
— Dan Poynter.

Imagination is like a muscle. I found out that the more I wrote, the bigger it got.
— Philip José Farmer

A well-composed book is a magic carpet on which we are wafted to a world that we cannot enter in any other way.
— Caroline Gordon

People will give you all sorts of advice about writing, but if you are not writing something you like, no one else will like it either.
— Meg Cabot

Make up a story... For our sake and yours forget your name in the street; tell us what the world has been to you in the dark places and in the light. Don't tell us what to believe, what to fear. Show us belief's wide skirt and the stitch that unravels fear's caul.
— The Nobel Lecture In Literature, 1993, Toni Morrison

Which of us has not felt that the character we are reading in the printed page is more real than the person standing beside us?
— Cornelia Funke

Perfectionism is the voice of the oppressor, the enemy of the people. It will keep you cramped and insane your whole life, and it is the main obstacle between you and a shitty first draft. I think perfectionism is based on the obsessive belief that if you run carefully enough, hitting each stepping-stone just right, you won't have to die. The truth is that you will die anyway and that a lot of people who aren't even looking at their feet are going to do a whole lot better than you, and have a lot more fun while they're doing it.
— Bird by Bird: Some Instructions on Writing and Life, Anne Lamott

One day I will find the right words, and they will be simple.
— The Dharma Bums, Jack Kerouac

There is something delicious about writing the first words of a story. You never quite know where they'll take you.
— Beatrix Potter

Fantasy is hardly an escape from reality. It's a way of understanding it.
— Lloyd Alexander

Always be a poet, even in prose.
— Charles Baudelaire

I write for the same reason I breathe - because if I didn't, I would die.
— Isaac Asimov

All I need is a sheet of paper
and something to write with, and then
I can turn the world upside down.
— Friedrich Nietzsche

Your intuition knows what to write, so get out of the way.
— Ray Bradbury

Just write every day of your life. Read intensely. Then see what happens. Most of my friends who are put on that diet have very pleasant careers.
— Ray Bradbury

Good writing is remembering detail. Most people want to forget. Don't forget things that were painful or embarrassing or silly. Turn them into a story that tells the truth.
— Paula Danziger

I try to write a certain amount each day, five days a week. A rule sometimes broken is better than no rule.
— Herman Wouk

You have to follow your own voice. You have to be yourself when you write. In effect, you have to announce, 'This is me, this is what I stand for, this is what you get when you read me. I'm doing the best I can—buy me or not—but this is who I am as a writer.
— David Morrell

The pages are still blank, but there is a miraculous feeling of the words being there, written in invisible ink and clamoring to become visible
— Vladimir Nabokov

One should use common words to say uncommon things
— Arthur Schopenhauer

Writing is a form of therapy; sometimes I wonder how all those who do not write, compose, or paint can manage to escape the madness, melancholia, the panic, and fear which is inherent in a human situation.
— Ways of Escape, Graham Greene

Talent is helpful in writing, but guts are absolutely essential.
— Jessamyn West

How do I know what I think until I see what I say?
— E.M. Forster

Quotes about the importance of writing

There is no greater agony than bearing an untold story inside you.
— Maya Angelou

If there's a book that you want to read, but it hasn't been written yet, then you must write it.
— Toni Morrison

The role of a writer is not to say what we can all say, but what we are unable to say.
— Anais Nin

He asked, "What makes a man a writer?" "Well," I said, "it's simple. You either get it down on paper or jump off a bridge.
— Charles Bukowski

How to overcome Writer's Block

I remember June of 2015. I came back from University, sat down to write in my daily journal, and picked up my pen. I stared at the blank page with a sense of impending doom. Writer's block. It was here. For so long, I had evaded its dark clutches, but it had caught up to me. I knew one day it would...

If you want to change the world, pick up your pen, and write.
— Martin Luther

Writing is utter solitude, the descent into the cold abyss of oneself.
— Franz Kafka

Quotes by famous authors and poets

With writing, the way you feel changes everything.
— Stephenie Meyer

Sometimes the ideas just come to me. Other times I have to sweat and almost bleed to make ideas come. It's a mysterious process, but I hope I never find out exactly how it works. I like a mystery, as you may have noticed.
— J.K. Rowling

If you want to really hurt your parents, and you don't have the nerve to be gay, the least you can do is go into the arts. I'm not kidding. The arts are not a way to make a living. They are a very human way of making life more bearable. Practicing an art, no matter how well or badly, is a way to make your soul grow, for heaven's sake. Sing in the shower. Dance to the radio. Tell stories. Write a poem to a friend, even a lousy poem. Do it as well as you possible can. You will get an enormous reward. You will have created something.
— A Man Without a Country, Kurt Vonnegut

I can shake off everything as I write; my sorrows disappear, my courage is reborn.
— Anne Frank

Don't bend; don't water it down; don't try to make it logical; don't edit your own soul according to the fashion. Rather, follow your most intense obsessions mercilessly.
— Franz Kafka 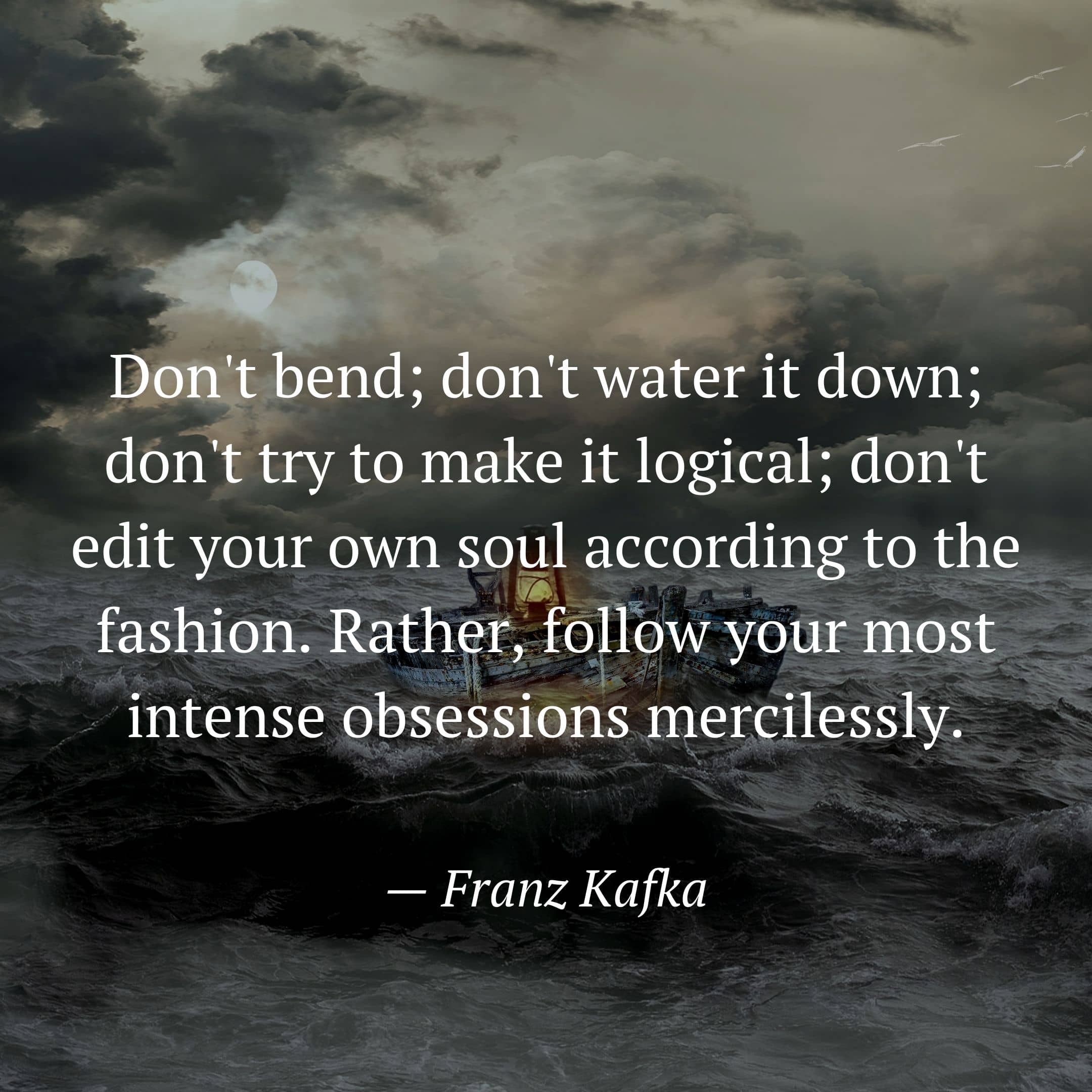 There are books of which the backs and covers are by far the best parts.
— Oliver Twist, Charles Dickens 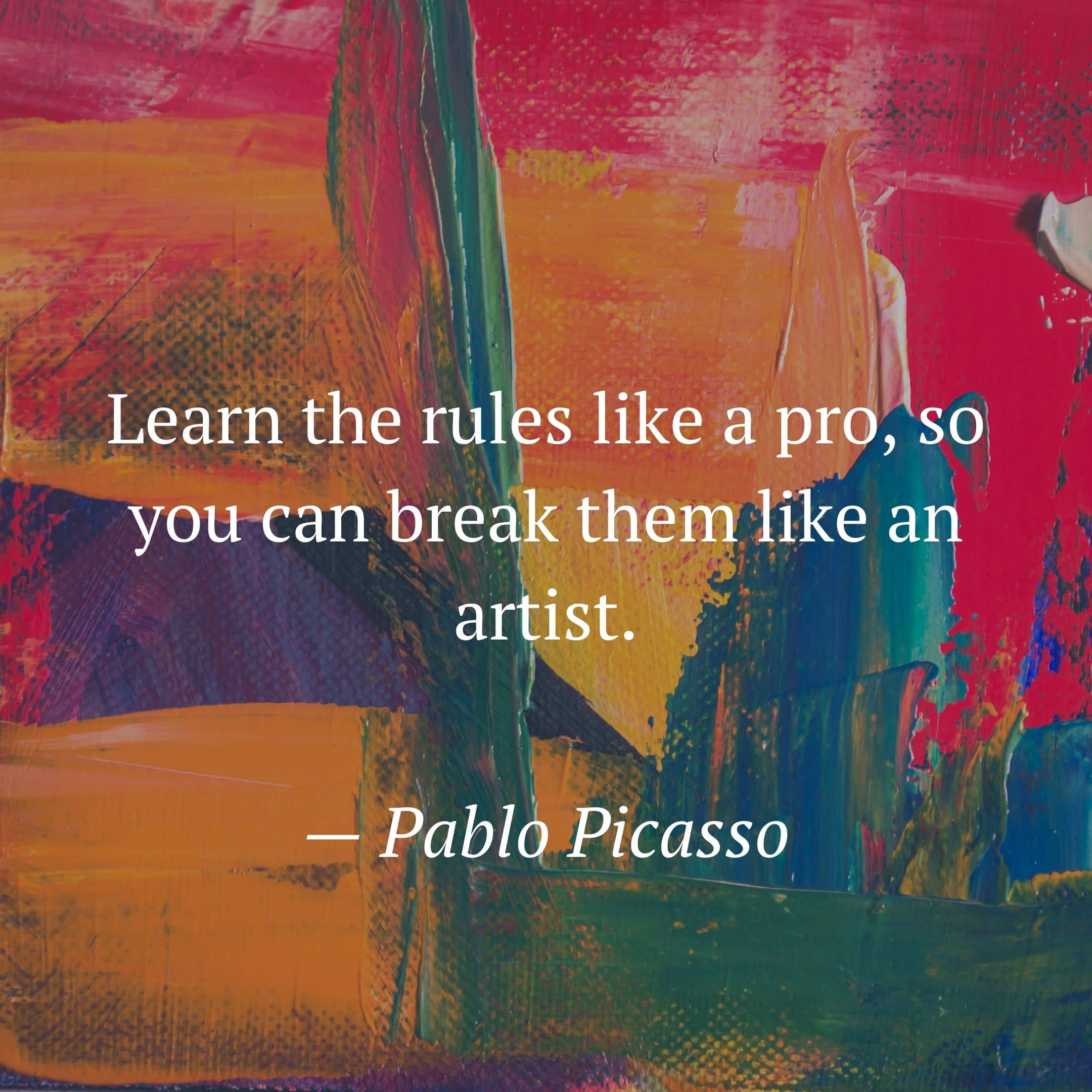 I have claimed that Escape is one of the main functions of fairy-stories, and since I do not disapprove of them, it is plain that I do not accept the tone of scorn or pity with which 'Escape' is now so often used. Why should a man be scorned if, finding himself in prison, he tries to get out and go home? Or if he cannot do so, he thinks and talks about other topics than jailers and prison walls?
— J.R.R. Tolkien

There is no real ending. It's just the place where you stop the story.
— Frank Herbert

So long as you write what you wish to write, that is all that matters; and whether it matters for ages or only for hours, nobody can say.
— A Room of One's Own, Virginia Woolf

So what? All writers are lunatics!
— Inkspell, Cornelia Funke

I haven't any right to criticize books, and I don't do it except when I hate them. I often want to criticize Jane Austen, but her books madden me so that I can't conceal my frenzy from the reader, and therefore I have to stop every time I begin. Every time I read Pride and Prejudice I want to dig her up and beat her over the skull with her own shin-bone.
— Mark Twain

Ideas are like rabbits. You get a couple and learn how to handle them, and pretty soon you have a dozen.
— John Steinbeck

You can fix anything but a blank page.
— Nora Roberts

The person who writes for fools is always sure of a large audience.
— Religion: A Dialogue and Other Essays, Arthur Schopenhauer

Who is more to be pitied, a writer bound and gagged by policemen or one living in perfect freedom who has nothing more to say?
— Kurt Vonnegut

85 Quotes About Love From Books

life plays with us. Sometimes it makes fun of us and sometimes life itself becomes funny. Here are a few fun quotes about life to make you smile.

A touch of Science Fiction (Sci-fi) in our otherwise (mostly) boring lives is one way to liven things up. From Ray Bradbury to Heinlein and H.G. Wells, here are some 60 sci-fi quotes that are sure to provoke your inner creative!

Get the latest Streetwriters posts, features, tips and recommendations delivered directly to your email inbox.

You can unsubscribe at any time by clicking the link in the footer of our emails.